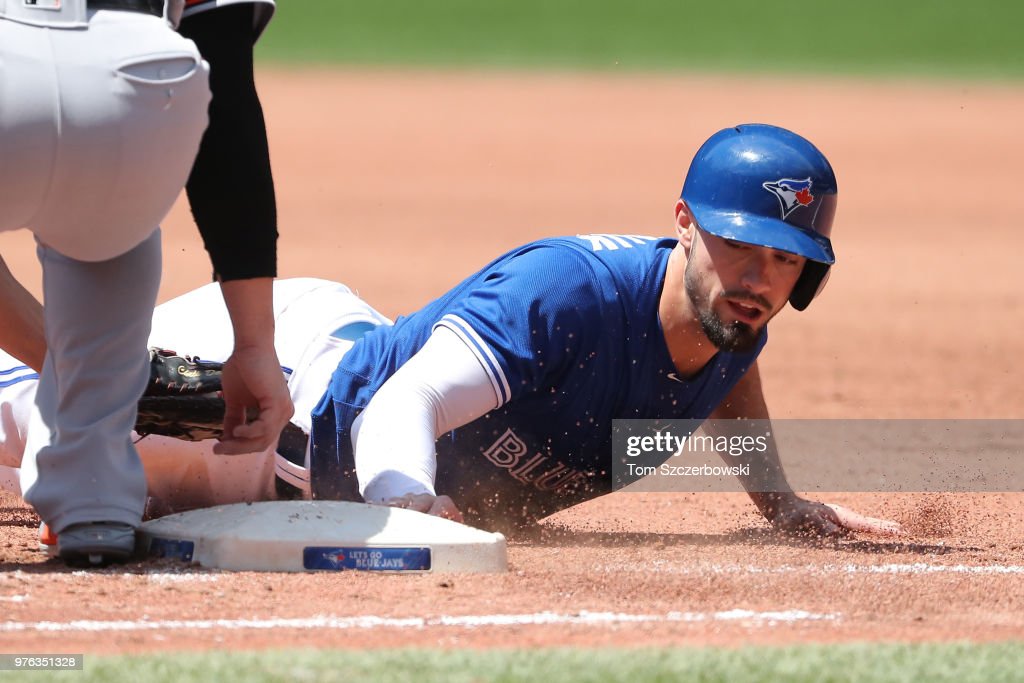 Randal Grichuk #15 of the Toronto Blue Jays dives back safely to first base on a pick-off attempt in the fourth inning during MLB game action against the Baltimore Orioles at Rogers Centre on June 10, 2018 in Toronto, Canada. (Photo by Tom Szczerbowski/Getty Images)

Randal Grichuk’s recent, if belated, success in Toronto as a Blue Jay this season does not surprise me. His slump didn’t either. He’s a powerful strikeout homerun streaker. But he’s worked hard at his technique – both over last winter and on his latest DL rehab. The batting cage hadn’t been his friend until it suddenly was. Adjusting his stance, relaxing and letting the ball come to him, and swinging to hit – not swinging to leave the park, have clearly turned him around. He can be the star I’ve always known he is. Plus, he’s gracious, kind, composed, loves dogs, is often-times silly, and obviously he flaunts his “easy to manage windblown hair”.

Baseball players come and go. I tend to latch onto them as the St Louis Cardinals acquire them. Pitchers I’ve fanatically followed have gone more quickly (though Jason Motte has progressed into an incredible Strikeout [Childhood] Cancer foundation founder and spokesperson and should be knighted and sainted!). Grichuk is my first position player focus. I can hardly wait to see how far his major league ride takes him. Even while MLB’s Extra Innings tv package is rather expensive (less so this year with MLB.tv thrown in). And I’m with him ’til the earth crumbles into the sea.

This site uses Akismet to reduce spam. Learn how your comment data is processed.